Wow, April 1st already! Any April Fool’s Day pranks going on? Des is the KING of pranks on April Fools Day! He never fails to fool someone BIG TIME! Usually big elaborate pranks that get people really riled up too! He’s good though, he always seems to know when to reveal the joke, before it gets TOO far! He only ever pranks co-workers, and every year they swear they will get him back, but so far it has not happened. He’s hard to prank! This year, he is not at work and I am a little nervous! I will have to be on the alert all day!

Last year I got the boys to prank him, and we actually got him good. It was just a little child’s prank, but it was funny! I had them stuff the toes of his shoes hard with newspaper. So, when he was trying to put them on to go to work in the morning he kept slamming his foot in and his shoes wouldn’t fit! He’s half asleep in the morning, so it was a good time to get him! He was grumbling…What the heck is in my shoe?? Until he pulled out the paper and remembered what day it was! The boys were giggling about it all day! He was proud of them. lol

Anyway, let this be a reminder: BEWARE!

I’m posting this card today because I finished last night as part of an order I have. I designed it back in January, and it’s only slightly more appropriate for the time of year now! 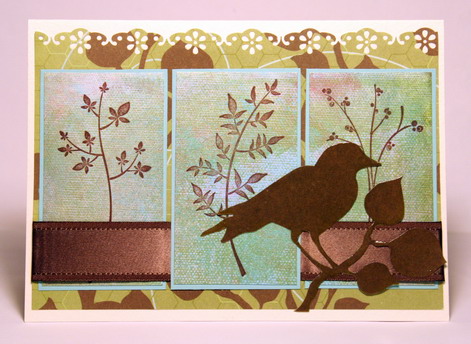 It was originally made using a sketch challenge from SCS.

The base here is a cream cs. The next layer is Provo Craft dp. The top edge is punched with Martha Stewart floral edge punch.

The panels are stamped with Bravo Burgundy SU ink on Memory Box Echo dp. These are matted with a layer of Soft Sky Stampin’ Up card stock.

The Chocolate Chip ribbon by SU is wrapped around the panels, with the middle panel set over it.

The bird was cut from the same first layer paper, and clear heat embossed.

Don’t forget to take a look at TODAY’S FAVES! There’s some gorgeous ones from some blogs you should check out!