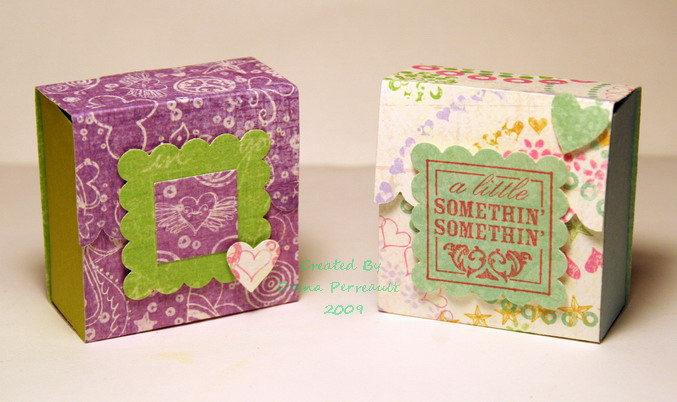 These sweet boxes were inspired by the tiny chocolate boxes featured on SCS.   I love these little 2″square by 1″ deep boxes.  They are  just so perfect for a small treat!  With Valentine’s just around the corner, they will come in handy for those sweet surprises.

Beate included a tutorial for these boxes on SCS, and it is great!   But I have to admit something.  I am always looking for alternate ways to do things.  I am a hands on “tinkerer”. Usually I will only glance through a tutorial, mostly at the pictures, then start playing with my papers, measuring and scoring until I have something that works for me. Usually a simplified version of the original.   I rarely actually follow the directions.  (hey, it works for me!)  It’s a lot like a cook who never follows a recipe, but instead adds or leaves out ingredients at their discretion. (which I also do)   So, with that said; I modified how I made these boxes, even though the end result looks the same.  And for those of you who do like to follow the directions or use the pictures as a guide…I’ve included both. 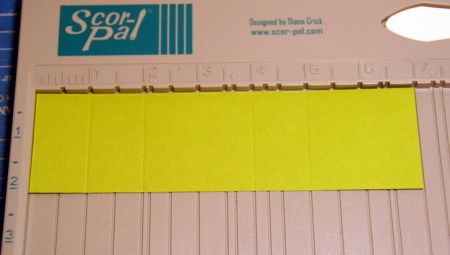 Fold card stock at score marks to form a square, and using tacky tape adhere closed. (short end on the inside) 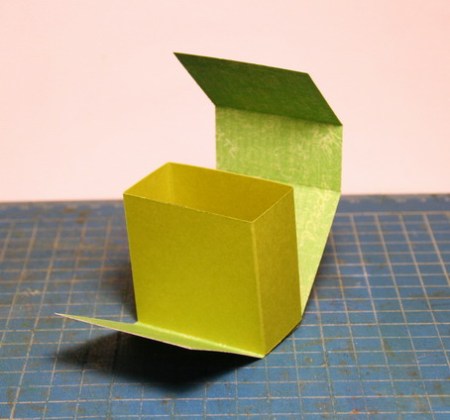 Fold and unfold all the scored lines of your decorative paper, so they will fold properly later.  Starting with the 2″ end of the decorative paper align it to the front of the formed box, and adhere, with the tacky tape. 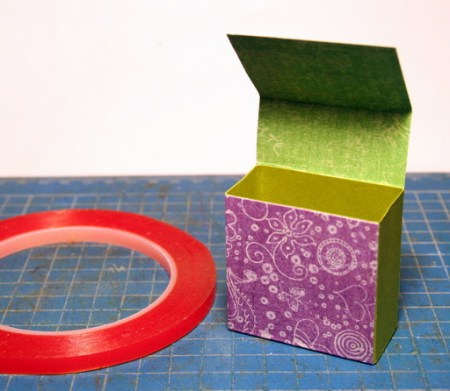 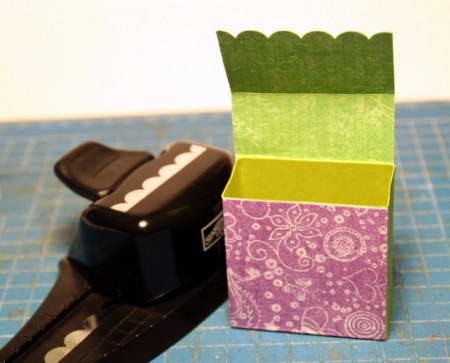 Use your edge punch/scissors to give the top flap a decorative edge. 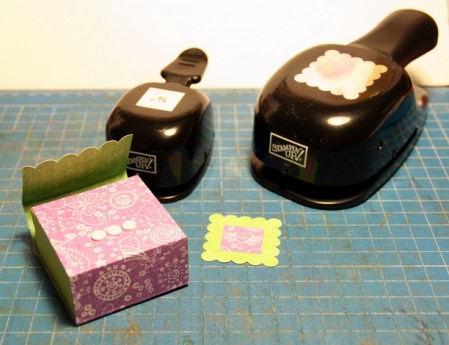 For the closure, I punched a scallop square, and placed 3 adhesive pop dots on the front of the box right below the base of the closed flap.  I used these to stick the scallop square down. (the adhesive dots should be at the bottom of the square)

The top flap slips in behind the closure to stay shut.

That’s it!   EASY isn’t it?  Decorate it the way you want to for any occasion.  So, what do you think? Will you be making a half dozen of these?  Trust me, they’re addictive!

Be sure to have a look at Beate’s tutorial on SCS too.  As they say, there is more than one way to skin a rabbit.   This just happens to be my way.   Hope you liked it!

Have a creative day!!

So glad you stopped by! I appreciate all your questions and comments.